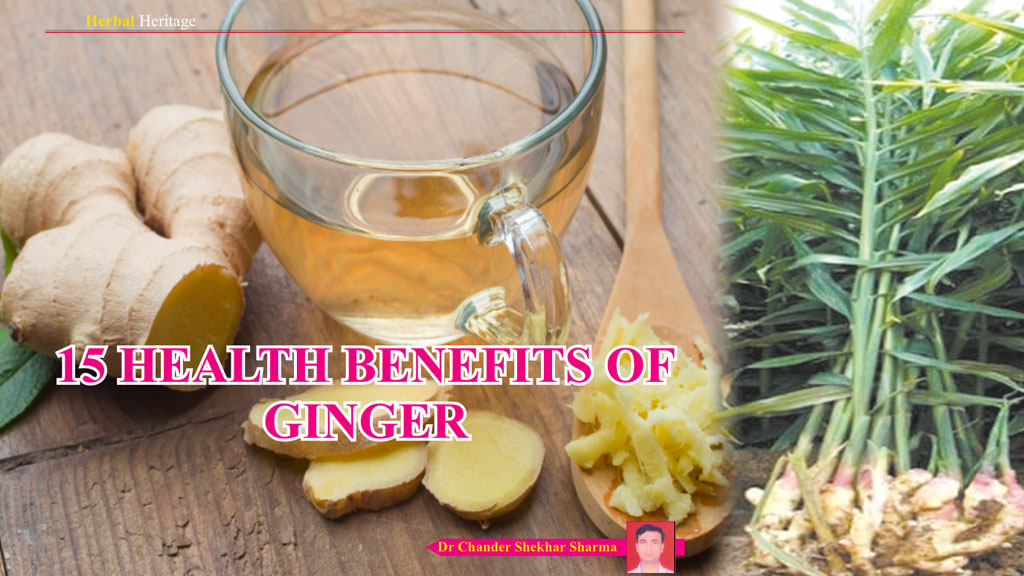 Ginger has a very long history of use in various forms of traditional medicine. In addition to its flavoring effects, it is also considered an essential component of the kitchen pharmacy and is particularly used in combination with foods which cause delayed gastric emptying or flatulence. The rhizome part of the ginger is commonly used as a spice.

Ginger has a very long history of use in various forms of traditional medicine. In addition to its flavoring effects, it is also considered an essential component of the kitchen pharmacy and is particularly used in combination with foods which cause delayed gastric emptying or flatulence. The rhizome part of the ginger is commonly used as a spice. It can be taken fresh or dry. It can be used in the form of powder, juice or oil and is sometimes added to processed foods. It is a very common ingredient in recipes. The unique fragrance and flavor of ginger come from its natural oils, the most important of which is ginger oil. It is the main bioactive compound in ginger, responsible for much of its medicinal properties. It has powerful anti-inflammatory and antioxidant effects.
15 Health Benefits of Ginger
1.    Relieves nausea
Beneficial in reduced appetite, motion sickness and pain abdomen. It is highly successful against nausea and acts as the most potent treatment when it comes to pregnancy related nausea. The effectiveness of ginger as an antiemetic has been attributed to its carminative effect, which helps to break up and expel intestinal gas.
2.    As pain killer
Ginger has been shown to be effective against exercise-induced muscle pain. It does not have an immediate impact, but reduces the day-to-day progression of muscle pain. It is very beneficial in osteoarthritis, a common health problem. Studies have shown that people with osteoarthritis of the knee, when take ginger extract, feel less pain and require less pain medication.
3.    Chronic indigestion
Chronic indigestion is characterized by recurrent pain and discomfort in the upper part of the stomach. Delayed emptying of the stomach is a major cause of indigestion. Ginger has been shown to speed up emptying of the stomach in people with this condition.
4.    Dysmenorrhoea (menstrual pain)
Menstrual pain is a pain felt during a woman's menstrual cycle. Ginger is traditionally being used in menstrual pain.
5.    Regulates lipid profile
Nowadays number of people suffer from deranged lipid profile that which causes various symptoms in the body and may prove deadly sometimes. High levels of LDL lipoproteins & cholesterol are linked to an increased risk of heart diseases. The foods we eat can have a strong influence on LDL levels. There are evidences that ginger significantly reduces cholesterol and triglycerides.
6.    Alternate to treat cancer
Cancer is becoming very common today due to dietary changes, stress & environmental factors. Ginger extract has been studied as an alternative treatment for several forms of cancer. The anti-cancerous properties are attributed to 6-gingerol, a substance that is found in large amount in raw ginger.
7.    Immunity Booster
It is very helpful in treating chronic gum diseases. Gingerol, the bioactive substance in fresh ginger, can help lower the risk of infections. In fact, ginger extract can inhibit the growth of many different types of bacteria.
8.    Anti  Aging  & Memory Enhancer
Increased production of free radicals results in oxidative stress that can lead to DNA damage. Oxidative stress and chronic inflammation can accelerate the aging process .They are believed to be among the main reasons for alzheimer's disease and age-related cognitive decline. Studies suggest that the bioactive compounds in ginger can inhibit inflammatory responses that occur in the brain. There is also some evidence that ginger can enhance brain function directly. In a study of middle-aged women, ginger extract has shown to improve time and working memory.
9.    Anti hypertensive
Ginger is the smart man's aspirin and is a potent blood thinner, diuretic and anti-inflammatory agent that can help reduce blood pressure. It is also important to drink water with ginger as it can dehydrate the body if taken in large amounts.
10.    Antioxidant
The rich phytochemistry of ginger includes components that scavenge free radicals produced in biological system. Strengthening the body's defense by improving the antioxidant status, ginger use undoubtedly protects human beings against many chronic diseases.
11. Tonic for healthy hair
Fresh ginger root contains magnesium, potassium, phosphorous and vitamins that make hair strong, healthy and shiny. It is also rich in fatty acids which help prevent the thinning of hair.
12.    Antidiabetic
Ginger extract is beneficial in diabetes by increasing glucose uptake in muscles and fat cells. It has protective effect on β cells of pancreas.
13.    An Antiviral
Ginger stimulates macrophage activity & prevents viruses from attaching to cell walls, therefore acts as antiviral.
14.    Anti histaminic
Ginger has natural antihistamine properties. People suffering from an allergic condition of nose, lungs & skin can be benefitted by taking ginger.
15.     Anti infective
It is an all-around warming immune-stimulant that is delicious and useful in daily teas in cold and flu season.
The use of natural or alternative medicines has increased markedly over the last few years. More and more population is using herbal remedies without advice from a physician on the assumption that these substances will have a beneficial effect always. However, this might not be a safe or advisable practice. One should not do self medication, as it may prove fatal. Ginger is revered for its culinary and medicinal qualities, but the pungent spice can also pose some unexpected risks for people with certain medical conditions. So take a look at all of the things that ginger can do for you and get ready to add this spice to your life.