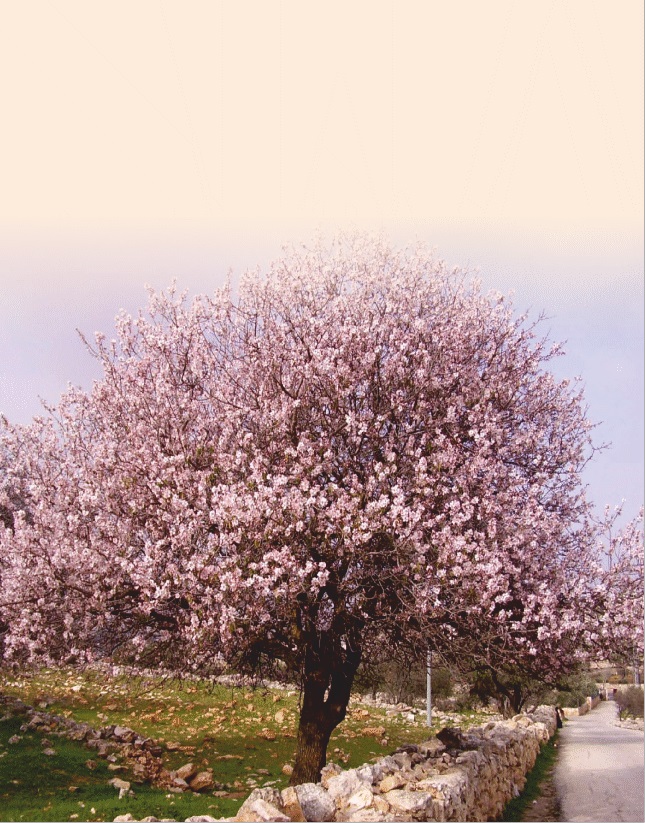 ALMOND  AN  ALL  WEATHER NUT

Every season brings some physiological changes in us and accordingly we have to modify our lifestyle, mainly diet & activity. Many changes take place during winters also.

One of the major change is an increase in digestive and metabolic efficiency and a higher demand for energy rich foods. Dry fruits fall under this category such as cashew nuts, walnuts, pistachios, peanuts, pine nut, dried apricot and almonds. Out of these, almonds can be used not only in winters for the reason mentioned above but is also a treat in summers and other seasons making it an all weather nut.

What Is In A Name?

The English name Almond is derived from an old French word 'Almonde' a shape which is a part way between a triangle and an ellipse. The Prunus amygdalus -the scientific name for almonds also signifies its shape derived from the Greek word “Amygdale”. A part of our brain is also of similar shape known as amygdala. One of the synonym described in Ayurveda is “Netropamaphalam” i.e. eye shaped. The other synonyms used in Ayurveda are Vataam or Vataad. The common hindi name Badaam has been derived from these terms signifying its principal pharmacological action which is Vata pacifying, making this nut useful for the nervous system specially for the brain. Therefore, it has the capability of making the one brainy.

It is a medium sized tree native to Mediterranean climatic region of the Middle East extending eastward to Iran, Afghanistan and India. It is also grown in Northern Africa, Southern Europe, Australia, Japan and California. Presently, California is the largest cultivator and trader of almonds.

During flowering season, the whole plant turns from green to pinkish white. The part used is fruit which in turn consists of three parts. The outer shell, the inner shell and the seed kernel. In the young state, the fruit is green and both the shells are soft along with the seed kernel. In this state, the whole fruit is used as a vegetable in Kashmir. As the fruit matures, the outer shell hardens a little bit and breaks apart and the inner shell becomes harder & woody containing the ripened innermost seed kernel covered with brownish skin. Thus all the three parts which seem to one part in green state separate from each other in the mature state. Even the skin of the seed kernel can be separated by soaking in water i.e. blanching.

Based upon the place of origin, four varieties are available in Indian market.

Grown in California and usually processed chemically under very high heat. The intense heat processing makes them sweeter. It may reduce the healthy oil content also. Due to their high production, these are readily available at low price.

These are grown organically in Afghanistan, Iran and Middle East. These are rich in carbohydrates as compared to other varieties and therefore good for growing kids.

These are also grown in Afghanistan but usually have a small seed kernel i.e. chhotigiri. These have high concentration of oils. But some of these have high amount of essential oils containing bitterness, hence a small portion of the total yield is bitter.

These are grown in Kashmir and have high concentration of vitamin E, protein and phosphorus, making them better for skin, teeth and bone health.

Based on shellhardness,there are two types:

Based on taste, two varieties are found:

As per Ayurveda Sweet Almond is sweet, hot, emollient, demulcent, heavy to digest & pacify vata. It works as  nervine tonic, promotes strength & growth. It is aphrodisiac in action. Its oil is also used as a mild laxative. Externally, various preparations of sweet almonds are used for skin & hair problems. Almond shell charcoal i.e. burnt shell is used as a tooth powder. As far as their increasing pitta action is concerned, the interpretation is that raw fruit which is consumed as a vegetable in fresh state in Kashmir is pitta aggravating and should be avoided in paittika conditions like raktapitta. The ripened seed kernel is ushna but not pitta  aggravating specially after soaking in water overnight. That is why it is used in cooling drinks during summers.

The bitter variety has not been intended to be used by Ayurvedic Acharyas. However, this variety has been used by Hakims in Unani System, more often, externally. As this variety contains poisonous substances, its internal use may be harmful. Sixty bitter almonds ingested at one time may prove to be fatal.

Almonds are a source of vitamin E, calcium, copper, iron, magnesium, phosphorus and high-quality protein. It also contains zinc, selenium, copper, niacin and high levels of healthy unsaturated fatty acids along with high levels of bioactive molecules such as fiber, phytosterols, other minerals and antioxidants.

The health benefits of almonds have been documented for centuries and modern research backs up some of these claims.

Almonds are one of the best natural sources of vitamin E, providing 37 percent of the recommended daily intake in just 1 ounce. The mono-unsaturated fats, protein, and potassium in almonds are all instrumental in heart health. Vitamin E is an effective antioxidant and also reduces the risk of heart diseases while the presence of magnesium in almonds can help avoid heart attacks. They help to reduce the presence and impact of C-reactive proteins which cause artery-damaging inflammation. They are also a great source of folic acid. Therefore, they help to reduce the level of homocysteine which causes fatty plaque buildup in arteries. Furthermore, the flavonoids in the skin of almonds combine with vitamin E to form a powerful shield against artery wall damage. Research suggests that short-term almond-enriched diet may improve vascular function in asymptomatic healthy men aged between 20 and 70 years. The potassium present in almonds helps to regulate blood pressure and low levels of sodium help to control the fluctuating blood pressure.

Our body has many components that add to overall health including the alkalinity of the systems. They are great sources of alkali materials and this is known to benefit the strength of the immune system thereby keeping many diseases away.

A mediterranean diet incorporating nuts such as almonds, helps to fight diabetes. Almonds also help to reduce the reactionary rise in glucose and insulin levels after meals. This modulation offers protection from the dangerous spikes in blood sugar which diabetics often suffer from following a large meal or a meal with an unexpectedly high level of sugar. Almonds help to regulate the absorption and processing of glucose making the entire process much smoother & subsequently safer.

This ability is thought to be due to their high levels of magnesium, containing almost half the daily recommended amount in just 2 ounces of almonds. In around one-third of people with type 2 diabetes, magnesium levels are low.

Almonds are a rich source of many nutrients which help in the development and health of the human brain. They have been connected to a higher intellectual level and they have long been considered as essential food item for growing children. These dry fruits also contain two vital brain nutrients riboflavin and L-carnitine, which have been shown to increase brain activity resulting in new neural pathways and decreased occurrence of Alzheimer’s disease.

Almonds are a rich source of phosphorus & calcium which have a considerable impact on the strength and durability of bones and teeth. They also help in preventing the onset of age-related conditions like osteoporosis.

Almonds contain folic acid which helps to reduce the incidence of birth defects in newborn babies. It also stimulates healthy cell growth and tissue formation. Doctors regularly prescribe folic acid supplements to pregnant women to ensure proper development of the fetus and almonds have enough folic acid to keep mothers and their babies healthy. Almonds are considered safe during pregnancy, lactation and in children.

The benefits of almonds with regard to skin health are well known and almond oil massages are often recommended. Almond milk is also added to some cosmetics because of well-established reputation for improving the complexion of skin. Almond and saffron with milk are very beneficial for skin blemishes & complexion.

Unsweetened almond milk can be used if you are attempting to lose weight. The mono-unsaturated fat contained in almonds satisfies the appetite and prevents over-eating. The dietary fiber in almonds also contributes to the sensation of feeling full, despite eating only a small amount. An almond-rich, low-calorie diet is good for obese people to assist in shedding their excess weight. People who regularly consume almonds are far more likely to remain at their ideal weight rather than those who rarely or never consume almonds and suffer from weight fluctuations. The fiber contributes to consistent bowel movements which helps in weight loss and the general health of the body by the elimination of toxins.

Bitter variety may be toxic when consumed internally. Excess of even sweet variety almonds usually more than10 per day may cause bloating, constipation and nausea as these are heavy to digest. This quantity may vary from person to person depending upon their digestive strength. The digestibility can be improved by roasting or blanching i. e. by removing the skin of almonds after soaking them in water as the skin is more difficult to digest.

“Almond works as  nervine tonic, promotes strength &  growth. Its oil is used for skin & hair problems. It is also used as mild laxative.”

“Almonds help to regulate the absorption and processing of glucose making the entire process much smoother & subsequently safer.”

“Almonds are a fantastic source of phosphorus & calcium which have a considerable impact on the strength and durability of bones and teeth.”