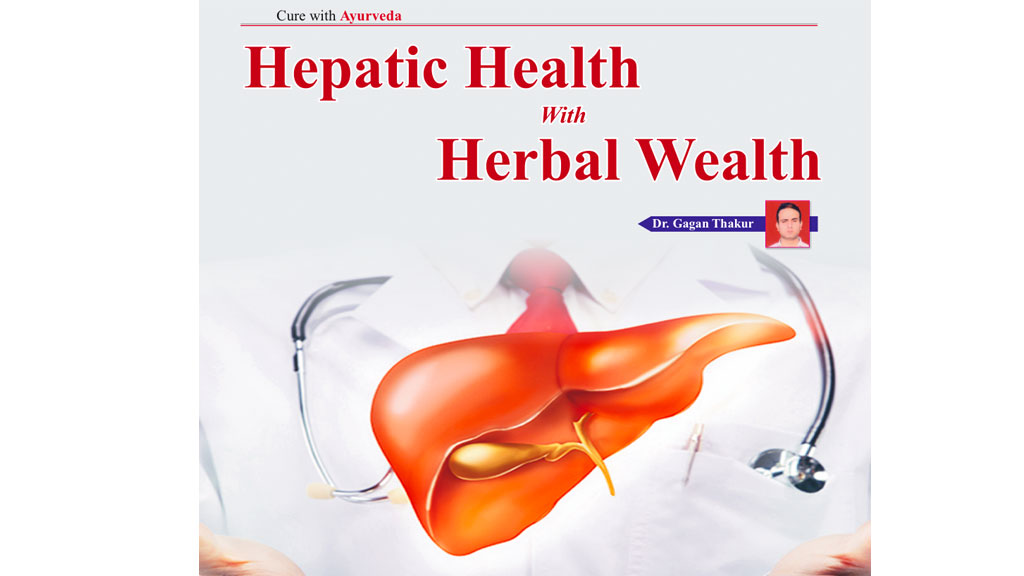 The heaviest internal organ liver, is the largest gland in human body located in the right upper side of abdominal cavity. It weighs about 1.5 kg in adult man. It is multifunctional organ. Most of us are aware about the role of liver in digestion and know about the common disease of liver i.e. Jaundice.

The heaviest internal organ liver, is the largest gland in human body located in the right upper side of abdominal cavity. It weighs about 1.5 kg in adult man. It is multifunctional organ. Most of us are aware about the role of liver in digestion and know about the common disease of liver i.e. Jaundice. But, it is also related with many body processes like detoxification, synthesis of proteins, glycogen storage, decomposition of red blood cells, production of hormones, clotting of blood, storage of vitamins and minerals, activation of enzymes and many more. In this article, we shall get some information about liver, its diseases and some useful herbs for keeping our liver healthy. We shall start with its structure to know liver from cellular level.

It is reddish brown, wedge shaped organ with four lobes of unequal size and shape. Its functional unit is called lobule which is made up of millions of liver cells called hepatocytes. Liver is covered with a fibroelastic layer which is known as glisson’s capsule. It is grossly divided into two portions, a right and left part. Right part is larger than left part. It receives a dual blood supply from hepatic portal vein and the hepatic arteries. Hepatic portal vein has its importance as it brings blood from the small intestine which is rich in absorbed micro nutrients like glucose, amino acids, fatty acids, vitamins and minerals which are either stored or converted into other particles.

Bile  A Golden Secretion
Bile is bitter, yellowish brown secretion produced in the liver and is essential for digestion of fats. It is formed in liver and stored in gall bladder or released directly into the small intestines. After being stored in gall bladder, the bile becomes more concentrated than when it leaves the liver. This storing mechanism makes the digestion of fats better as potency of bile is increased. Another important aspect of bile is its alkaline nature which neutralizes excess stomach acid in small intestines. Salts present in bile destroy many of micro organisms which may be present in food. Thus bile performs multifunctions from digestion to destruction of harmful micro organisms.
The term risk factor means exposure of an individual that increases the likelihood of developing a disease or injury. The more the exposure to risk factors, the greater are the chances of getting a liver disease. So, avoidance and following healthy life style is key to healthy liver.

Common Feature of Liver Diseases
Liver diseases can be caused by a variety of factors which can damage liver. Diseases of liver can be inherited or can be caused by viruses, alcohol, medicines, obesity etc. There are many features which can be personally noticed by the concerned person and if proper treatment is taken, there is good healing of this vital organ.
If a person notices many of the above symptoms then he must consult a physician regarding liver wellness.

COMMON DISEASES OF LIVER
Jaundice
Jaundice is the most common disease related to the liver. It is found by the patient himself when he notices yellow colour of skin, eyes and dark yellow coloured urine accompanied by weakness, nausea and reduced appetite. It is mainly caused by virus. In medical terminology, it is called ‘Hepatitis’. Jaundice may be caused by contaminated water or blood and blood products. In Ayurveda texts, this disease is termed as Kamala. It is considered as Pitta dominant disease. ‘Haridra netra-tvaka-nakha and mukha’ are described as symptoms of Kamla. Here the word haridra means yellowish colour as of Haldi (turmeric) tvaka means skin, nakha means nails and mukha means facial skin. Jaundice  can be very well managed with the Ayurvedic herbs.
Gall Bladder Stones
Stone formation in the gall bladder is a very common malady. Researches show that cause of the gall bladder stones lies in the cells of liver which secrete less bile acid but more cholesterol. This nature of bile is called lithogenic bile. The word lithogenic means stone forming. Standard treatment of gall bladder stone is surgical removal of the gall bladder.
As per Ayurveda, any person who takes food rich in fats (oil and ghee) and has sedentary lifestyle is at risk of developing gall stones. Many ayurvedic formulations and herbs are available to cure liver cells which are responsible for the disease.
Cirrhosis of Liver
Cirrhosis is a late stage of liver disease caused by many factors that lead to liver damage. Chronic alcoholism and  Hepatitis are main factors which cause cirrhosis. Cirrhosis can be understood by taking an example of any injury on skin. Whenever we have an injury, our body tries to repair itself and a scar is formed. Same happens in the liver. Whenever there is an injury to the liver, there is formation of scar tissue and repeated injuries cause many scars which result in reduced size of liver due to which many complications like swelling of the abdomen (ascites), bleeding from stomach, altered brain and kidney functions happen, which ultimately leads to liver failure. If a patient starts taking herbal medicines well in time and stays away from alcohol and other causing factors, his life can be enhanced and his disease can be very well managed.
Fatty Liver Disease
Fatty liver disease is also a most common liver disease of modern age. More than 10 million  patients fall into this category of disease every year in India. As the name signifies, it is accumulations of fat in the liver. This accumulated fat causes damage to the liver and can advance the cirrhosis of liver and liver failure. Fatty liver initially causes no signs and symptoms but in advanced conditions, it can show features like fatigue, pain or discomfort in upper right abdomen with abdominal swelling, red palms, jaundice etc. Early diagnosis of fatty liver can be made by ultrasonography of abdomen.

Ayurvedic Herbs for Liver Health
Ayurveda has many useful herbs to enhance the health of liver and clearing toxins from. Research done on ayurvedic herbs shows that they can help fight liver disorders like hepatitis, cirrhosis of liver etc. A few of them are described here.
Bhumiamalki
Bhumiamalaki or phyllanthus niruri is popularly used in Ayurveda and Siddha for liver diseases. It is widespread tropical plant commonly found in northern and coastal India. It has seeds under its leaf which resemble miniature amla. It not only manages active liver disorders but also reverses any damage caused to the liver due to its hepatoprotective, anti-oxidant and antiviral actions.
Bhringraj
Bhringraj (Eclipta alba) is a famous herb known for its benefits and usage in liver disorders. It is also very effective in hair problems, skin diseases and metabolic diseases. It is very commonly available herb in India. It is hepatoprotective and stimulates regeneration of liver cells. It increases bile production, enhances digestion, stimulates breaking down and expulsion of toxins and improves overall liver health. It also protects liver against alcoholic toxicity. Its svarasa (juice) is often used in different viral infection of liver.
Kutki
Kutki is considered as Ayurveda's premier liver tonic, but its benefits reach far beyond the liver. It decongests bile  and liver ducts, supporting healthy bile flow. It is bitter tonic for liver that grows in high-altitude Himalayan region. It detoxifies liver, intestines and has wonderful anti- inflammatory and anti bacterial properties. It also protects the liver against damage caused from hepatitis virus.
Haldi
Turmeric or curcuma longa proved to have many health benefits for the liver and digestive system. In Ayurveda this herb is known as a digestive bitter and carminative. It is very helpful for increasing liver's bile production and promotes bile excretion through the gall bladder. It also helps patients suffering from hepatitis, jaundice and cirrhosis of liver and is known as powerful detoxifier for liver.
Ghrit kumari
There is impressive list of benefits of this herb that range from external like cleaning the skin to the internal like cleansing of liver. Ghrit kumari is easily available herb in Indian subcontinent and it is a rich cocktail of vitamins, minerals, aminoacids and fibre. Aloe vera is excellent detoxifier which not only removes various toxic substances from the body but also boosts metabolism. Ghrit kumari also increases good bacteria in the gut and alkalizes the body. It strengthens immune system and is also regarded as adaptogens  (helps body to adapt to stress).
Giloye
Guduchi-Giloye-Amrita is well documented in Ayurvedic literature. It has wonderful ability to detoxify liver and maintaining proper functioning of liver cells. One of the biggest benefits of giloye is that it can help stimulate the regeneration of liver tissue that has been damaged. It is a powerful anti-inflammatory agent which is very helpful for inflamed liver conditions like hepatitis, alcoholic liver disease, jaundice and cirrhosis of liver.
Amla
The Indian gooseberry or amla is a very potent liver protectant. Scientific studies on amla have shown that it is very effective in preventing the toxic effects of commonly used drugs like paracetamol, anti tubercular drugs and alcohol. It is very effective in treating hyperlpidemia which is very common now a days. It has also shown protective effects against liver cancer in various studies. It is a powerful antioxidant and helps in rapid healing from all kinds of infections and inflammations.
As liver plays a central role in all metabolic processes in the body so every health conscious individual should know about it. Early detection of liver disease is very helpful in managing the long term outcome of disease.
Daruhaldi
Daruharidra is commonly known as Indian barberry. It is a wonder herb in treating liver diseases. Its roots are hepato-protective and detoxify liver. It is a potent anti-inflammatory in nature that is why it is used in all kinds of liver ailments. Apart from keeping the liver healthy it is commonly used as antiviral, antibacterial, antifungal and analgesic. It also boosts up the immune system. Rasaunt is a special preparation from this plant which is commonly used in Indian household for treating various ailments.

In the end it can be concluded that if liver is healthy then majority of body functions are supposed to be within normal limits and to maintain healthy liver Ayurveda has an edge over all other systems of medicine. All thse herbs should be taken under supervision of experienced Ayurvedic physician.